I was unable to stay away from the NUTS (Northern Utah Training Series--great acronym, eh?) 10k this past Saturday. It was more NUTS than most of these races as it was 17 degrees (instead of 24 degrees for the 5k) at the start of the race with a fair bit of wind. I can only remember one race which was colder: A national TAC race in Cincinnati—6 below zero. I wasn’t planning to run Saturday but then last week I accidentally ran 8 miles (6.2 of them about as hard as I could go) and the hip felt fine so I thought what the hell. My hip didn’t fair as well in the race even though I was only about 1:30 faster than my practice—granted it was a much tougher course with about 2 miles of hills and much much colder.

Even with the cold, it was psychologically an appealing race. Within the first block or two I dropped back to about 25th place. Throughout the first mile, which is all uphill, I slowly pasted 6 or 7 runners ending up with a 6:35 (not bad for an all uphill mile). Through mile two and three I pretty much stayed in about the same position with a group of 5 or 6 runners right in front of me. From mile three on (this is where the downhill starts) I slowly picked off the entire group and then focused on putting distance between me and them (the next runners ahead of me were a good half mile ahead). The downhill miles were faster (6:13, 6:16, 6:05). I snuck a peek behind me on the last corner: one guy remaining from the small group but he was about 15 seconds back. I refocused on my form for the last stretch, trying to hold it together as the pain increased. Just after the 6 mile mark a “fan” said, “Great job guys.” Oops, I immediately realized that the guy behind me had closed in. I tried to pick it up but to no avail—he passed me just a few yards from the finish. That was the only psychological downer but it didn’t dampen my spirits too much as I wound up first in my age division, 13th overall out of a several hundred runners, just under my goal time of 40 minutes, and first place in the series for the rugged 35-39 year olds.

Not the sub 35 I routinely and effortlessly ran as teenager and not the sub 38 I could have run last year but not bad for my higher age and low amount of training. We’ll see how the hip recovers—it’s mighty tight right now. And we’ll see if I can be a so-so runner and still enjoy it. I think I can learn to enjoy running for age division places instead of overall places, but unsure that I can avoid dumb decisions (e.g. ruining stomach with anti-inflammatories and prednisone, running injured, etc.) as all competition seems to make me a bit loony.
Posted by Counterintuitive at 7:39 AM 6 comments:

I had to pick up my daughter from a b-day party, not just any party but a teddy bear building b-day party at the mall. We came in on the wrong end—I don’t know the mall too well. Trying to find the stupid food court we passed a fancy jewelry—diamonds are forever kind of store, a kiosk selling some kind top for women where, for some reason, the manikins had real pointy breasts, a sporty shoe store with an athlete-on-steroids kind of ethos, and a zillion other stores one after another. The party had started off with some sort of teddy birthing experience (the teddy bear technicians wear nursing smocks, they weigh and measure the bears, and give them a name) and then finished up in the food court with cake and ice cream.

They were not hard to find (once I found the food court) as there were twelve giggly girls wearing b-day hats and holding teddy bears. Watching the party I felt a bit over-stimulated, very thankful I’d only be spending a few minutes. At one point I said to the mother, “So, you are really getting into the girl thing, going all out?” (she has two boys who are now adults; she had her 7-year old daughter with her second husband) and she replied, “Oh, this is the cheapest party we’ve done so far.” I mumbled something unintelligible while thinking about saying, “Wow, I think this one party probably equals the total amount of money we have spent on all parties for each of our three children.”

I was with my four-year old and it looked like the eating cake ritual was just getting started, so we went for a few escalator and elevator rides while we waited. Always a delight to see his pure joy at something so simple.

I finally pulled my daughter away—one more party favor to pass out as the girls finished up. Making it through the mall back to where I parked, we passed some sexy underwear store (probably Victoria Secrets but I’m not certain). An overpowering perfume smell emanated out the door which just about gagged me; as if they need additional sensorial grasps on the public. By the time I reached the car, I felt physically ill.

On the way home I asked my daughter about the party—she was so excited about the whole bear experience she could barely get all the info out. I was already nervous that she’d ask for a teddy bear building party, but I tried to empathize with her enthusiasm. Her only complaint was that the b-day girl had to do everything first: “Ok now the b-day girl gets her bear first…her teddy bear gets three outfits because she’s the b-day girl…isn’t the b-day girl’s bear so nifty with its little voice box” (my daughter thought every bear should have come with a voice box).

At this point, I couldn’t take it anymore; I felt mentally and emotionally smothered by the grinning freshly birthed bears, lingering Victoria Secret perfume, pointy manikin breasts, and spoiled children shoving in ice cream with one hand while hanging on to their new born bear with the other: ALL which, somehow, represented pure and simple joy for each of the girls, including my very own daughter.
Posted by Counterintuitive at 5:31 PM 4 comments:

I picked up Howard Rheingold’s They have a Word for it: A lighthearted lexicon of untranslatable words and phrases over x-mas break as I was preparing for my Language and Society course. It’s not so lighthearted, at least in premise: Rheingold subscribes to the Whorfian linguistic claim that language causes us to feel and think differently and therefore sees his book as a way of introducing foreign words into our vocabulary which will change the American worldview and offer up new possibilities as we negotiate relationships, love, spirituality, and technology. Here are a few words I think we ought to start using, and, as Rheingold asserts, let’s just start using them even if you aren’t quite sure how to use the word or pronounce it—native speakers will be grateful either way.

Ho’oponopono (Hawaiian) a social mechanism for healing wronged parties where the offended sit down until the issue is set right. It could come to symbolize a powerful covenant, going beyond mere “family discussion” or “therapy.”

Tingo (Pacuense, Easter Island—rhymes with bingo) to take all the objects one desires from the house of a friend. I like this because we do not have a word that means borrowing with a positive connotation. Personally, I like it when people borrow something from me: it’s kind of a social glue which tells me they trust me enough to ask and which then allows me to ask them for something later on. I hate it when I see everyone with their own snow blower, sander, miter saw, leaf blower, rototiller, etc. Why can’t we all buy one each and then share? We only use these items a few times a year—such a waste.

Gemutlich (German—gem-OOHT-lick with a hard “g”) cozy, snug familial situation usually in a living room. That just nails it for me. Although not too often, my family has a gemutlich ever now and again, sometimes when we do a family cheer (not sure how this tradition started), frequently when we all snuggle up to watch a good film, and when (quite infrequently) we have a group hug. 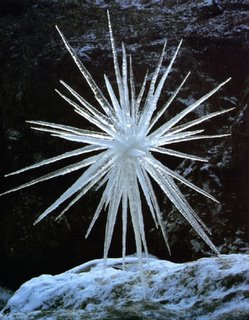 Aware (Japanese—ah-WAH-ray) ephemeral beauty. This would, of course, counter the western/US notion of beauty which seems so often tied to grandiose, stable, overpowering. Using this term we could, as Rheingold, argues cultivate a bittersweet aesthetic emotion for the transient. I think of the Art of Andy Goldsworthy, not necessarily the photographs of his work, but encountering his work al natural, in decay.

And, finally, just for fun:

Tartle (Scottish) This is when you are in the embarrassing situation of conversing with someone you have been introduced to but can’t remember their name. This is a good one since I often find myself in this situation and, more importantly, because it’s fun to say especially as a dig: “Don’t worry old boy, we all tartle at some point.”
Posted by Counterintuitive at 7:57 AM 9 comments:

Counterintuitive
I teach writing; I like to cycle uphill when I'm not injured; I was a liberal, then doubting Mormon, now I'm retired.